About Quito and Ecuador 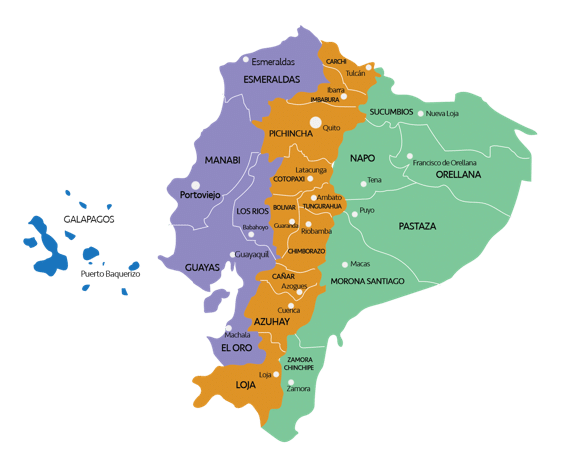 Ecuador’s name comes from the Equator, which divides it unequally, putting most of the country in the Southern Hemisphere.

Quito is located in the northwestern part of South America. Bordered by Colombia on the north, Peru on the east and south, and the Pacific Ocean to the west. In 2013 Ecuador was officially named “Country of Orchids” because of ten wild plants, four are orchids. And in 2008 as the “Land of Hummingbirds” as it is home to 124 species of this bird. 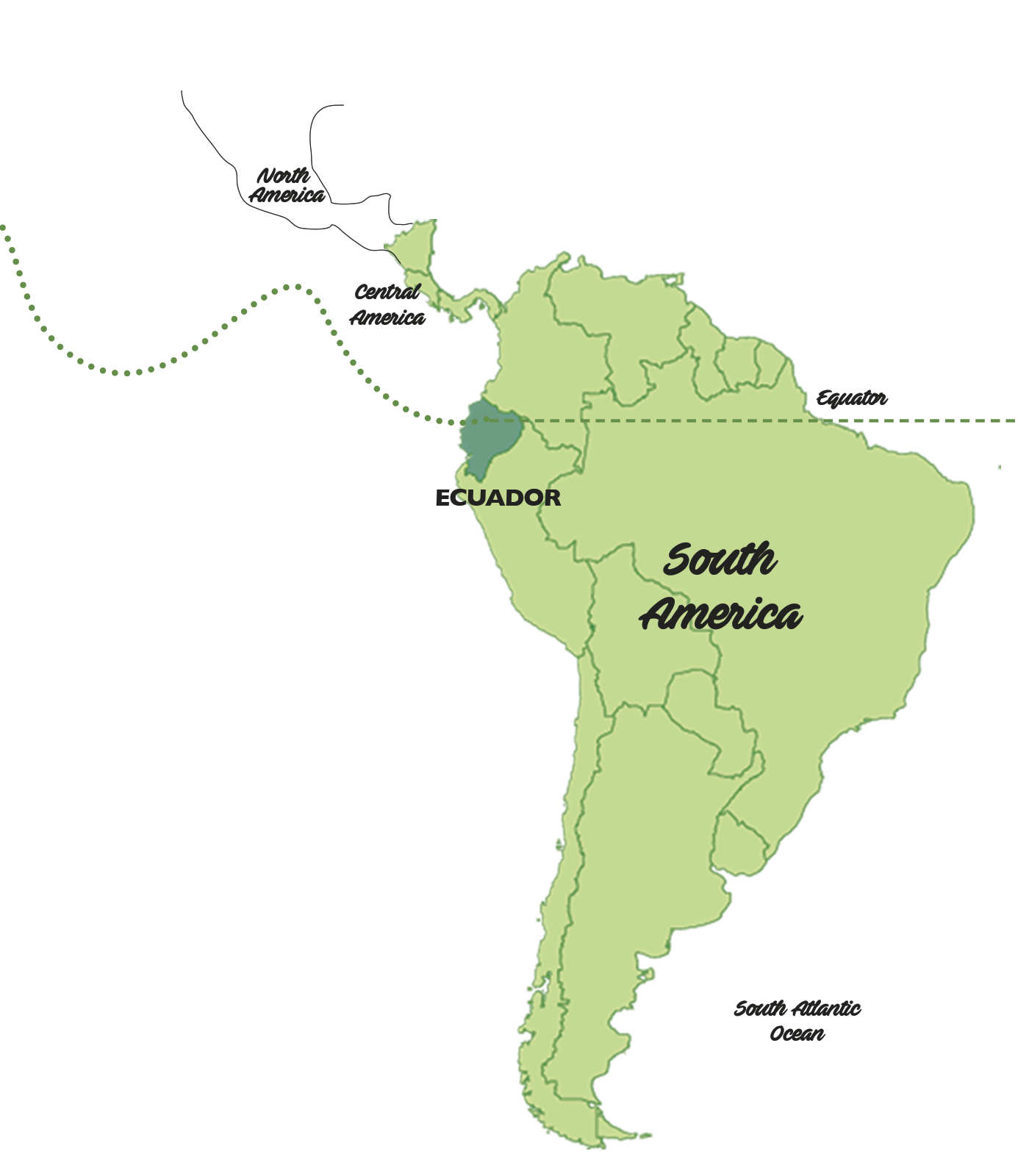 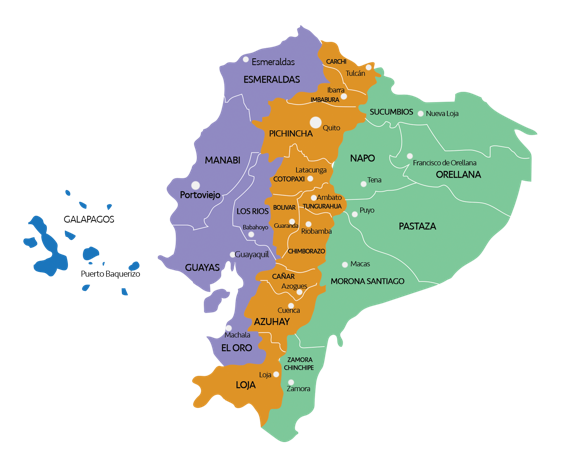 It may be the smallest Andean country, but it has four distinct and contrasting regions. The Costa, or coastal plain, grows enough bananas to make the country the world’s largest exporter of the fruit. The Sierra, or Andean uplands, offers productive farmland. Oil from The Oriente, jungles east of the Andes, enriches the economy.

The capital of Ecuador, was founded in the 16th century on the ruins of an Inca city and stands at an altitude of 2,850 m. Despite the 1917 earthquake, the city has the best-preserved, least altered historic centre in Latin America. The monasteries of San Francisco and Santo Domingo, and the Church and Jesuit College of La Compañía, with their rich interiors, are pure examples of the ‘Baroque school of Quito’, which is a fusion of Spanish, Italian, Moorish, Flemish and indigenous art.

Basilica del Voto Nacional is one of the most important examples of neo Gothic arquitecture in Ecuador. The Basilica Was blessed by Pope John Paul II on 1985, was officially opened on 1988. At present-day the church is still under construction. 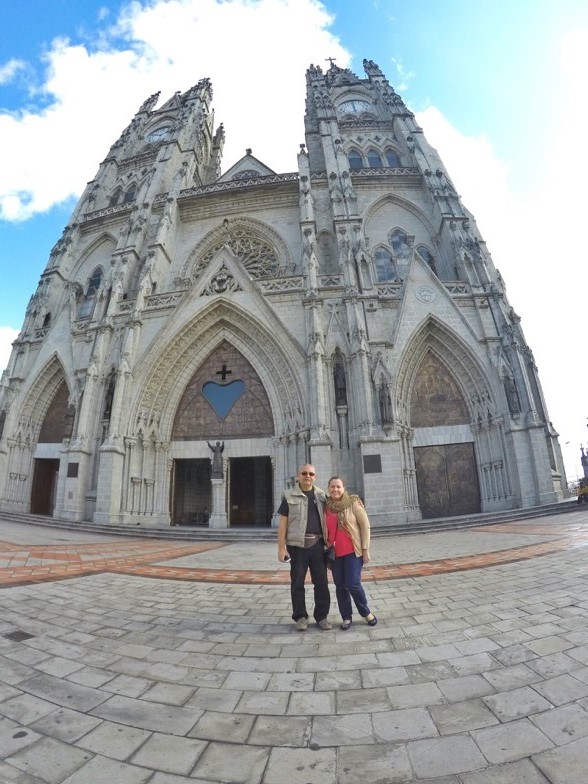 Quito is very easy to travel, and the orientation is always easy because the 15,000-foot Pichincha volcanoes is always to the west of the city. How the street numbering system works:

The transportation system of Quito makes the city easy to transit. Buses and taxis can take you anywhere, while the Trolebus and EcoVia are run in the north and on the west and east sides of Quito, respectively. Trolebus has its northern terminus located in “Labrador” (where it is located on August 10 and America), and a terminal station in a company in Quitumbe (where the new interprovincial bus terminal is located) and has buses that go to several different countries areas) passing through the El Recreo shopping center along the way.

The Metrobús goes down by America, which to the north of “Labrador” becomes La Prensa and then, at the stop of the Maestro, it becomes Diego Vasquez de Cepeda Avenue. and it takes you to the northern terminal station known as La Ofelia. From here, it is possible to take any of the several shuttle buses that transport you to the north interprovincial bus terminal in Carcelén.

My friend and I stayed at Casa Joaquin for 3 nights. The staff is extremely friendly and helpful, the location is close to the handicraft market, a wide variety of restaurants and shops, and our room was large, clean and comfortable. The staff, was on site every day where she offered a made-to-order...

Kris
This is a great little hotel, with a wonderful friendly staff. Everyone was knowledgeable and ready to answer questions. It was clean, comfortable and conveniently located. Would definitely stay there again

Trail21
We stayed at this wonderful hotel for two nights when we arrived in Quito and then one night four weeks later when we were on our way to the airport to fly home. We scheduled the driver to pick us up at the airport upon arrival. He was on time, friendly, and a safe driver. The hotel was beautiful. It was a...

Lydia B
This very comfortable hotel is located in La Marascal a block from Plaza Foch- which has many restaurants and is a pickup location for bus tours. The hotel staff treats you like family! The also make excellent breakfasts. We stayed five nights and are delighted that we did!

A wonderful hotel and location in Quito!

Linwood
Wonderful place to stay. Staff very friendly, kind and helpful. Breakfast was always tasty with choices, taxis were called immediately and any kind of help needed was provided. Could not have been better!!

Douglas S
This beautiful little boutique hotel is a gold mine in Quito. Though in the city, there is little noise as all the rooms have been soundproofed. They are clean, tastefully decorated individually, and with hot showers. Her coffee hand chosen from the South of Ecuador is so smooth and tasty in the morning and her breakfasts are prepared with detail and her love...

The experience of our guests in his own handwritin

Dear Raul, Thank you very much for taking your ti

Check out our apartment with detail information at

Starting our day with a great breakfast! 🥓🍳

Thank you to our wonderful guests! 💙🌺 . Book

Thank you very much for your lovely feedback about